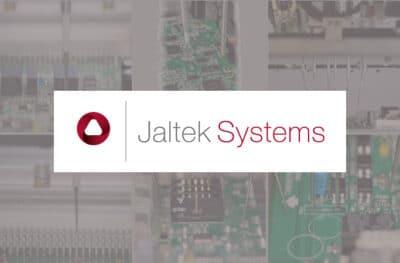 The TAKAYA APT-1400F is reported to be the fastest Flying Probe test system on the market, setting new standards for speed and test coverage with no compromise to quality and reliability.

The system has been specially developed for the test of large quantities of complex circuit boards. The APT-1400F has 6 ﬂying probes, of which 2 are vertical, enabling access to contact points that could not previously be reached. The design of the XY table has been completely revised and adapted to the high travel speed of the test probes and an outstanding measurement unit and numerous innovative test algorithms enable signiﬁcant increase of the test coverage on circuit boards.

The Takaya APT-1400F comes with a list of impressive features as standard, Jaltek also installed a number of additional functions making its performance in terms of test speed, positioning accuracy and coverage unprecedented in the UK.

David Mills, the Takaya service and support manager for Accelonix UK, remarked, ‘I have over 25 years experience working with Takaya ﬂying probes and know every installation in the UK, Jaltek’s new Takaya APT-1400F is the most fully featured model of its kind in the whole of the UK! Amongst all the usual reﬁnements that many of our customers go for, Jaltek can also boast a number of additional features that will give even more value and ﬂexibility to their customers.’

• Laser Measuring Unit – allows a single-sided tester to accurately measure component heights, to check for component compliance to IPC/customer requirements, BGS co-planarity to the PCB, or for non-ﬁtted components.

• Net Signal Wave Analysis (NSW) – heralded as a “quantum leap” in ﬂying probe testing of PCBAs, NSW technology characterises every net on a PCB into a unique signature which is used to compare against every board in the production batch. Most effective on large-scale densely populated PCBAs with many nets, NSW offers not only 100% shorts detection between every net on a PCB, but also it achieves this in a fraction of the time it would take conventional methods.• Power Relay Board – enables the connection of external test instruments to the system, controlling the application of bespoke test signals onto the board to assist in basic functional tests.

• Extended 80V DC Source/Measure Board – provides an additional 4-quadrant DC source for powering boards under test up to 80V DC.

• Function Scanner Board – boosts the current capacity of the DC sources from 1Amp to 2 Amps and allows integration of 3rd party boundary scan tools, either by wired connectors or through the probes themselves. THIS creates vastly superior test coverage through hybrid JTAG and ﬂying probe test programs – able to test nets that the probes cannot reach. JTAG can also be used to program ﬁrmware, test memory integrity, and signiﬁcantly reduce test times by verifying large parts of the board faster than conventional ﬂying probing.

• LED Colour/Intensity Measurement – a more common feature opted for on Takaya ﬂying probes, the two LED sensors can measure the colour wavelength and brightness of LED devices on PCBAs, providing further defect detection over AOI and ensures LED uniformity/conformity can be tested for – an important requirement in applications such as medical and automotive sectors.

Commenting on the acquisition of this new Takaya machine Steve Pittom, Managing Director, said, ‘We continue our commitment to invest for our customers. This fully featured new ﬂying probe will bring signiﬁcant value to our customers particularly those who have AS9100 and ISO13485 requirements as well as for new product introduction. We can’t wait to start putting it to the test!